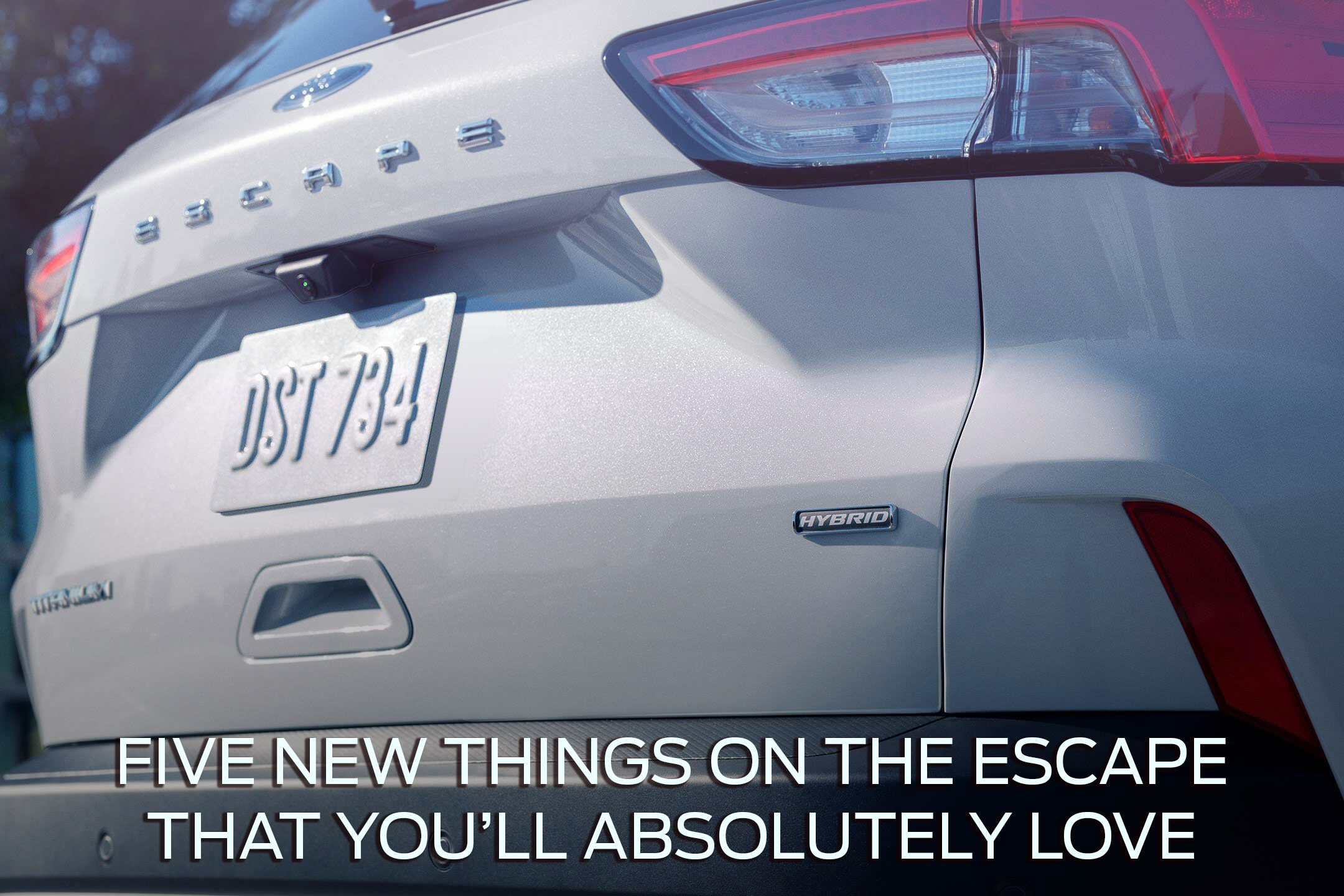 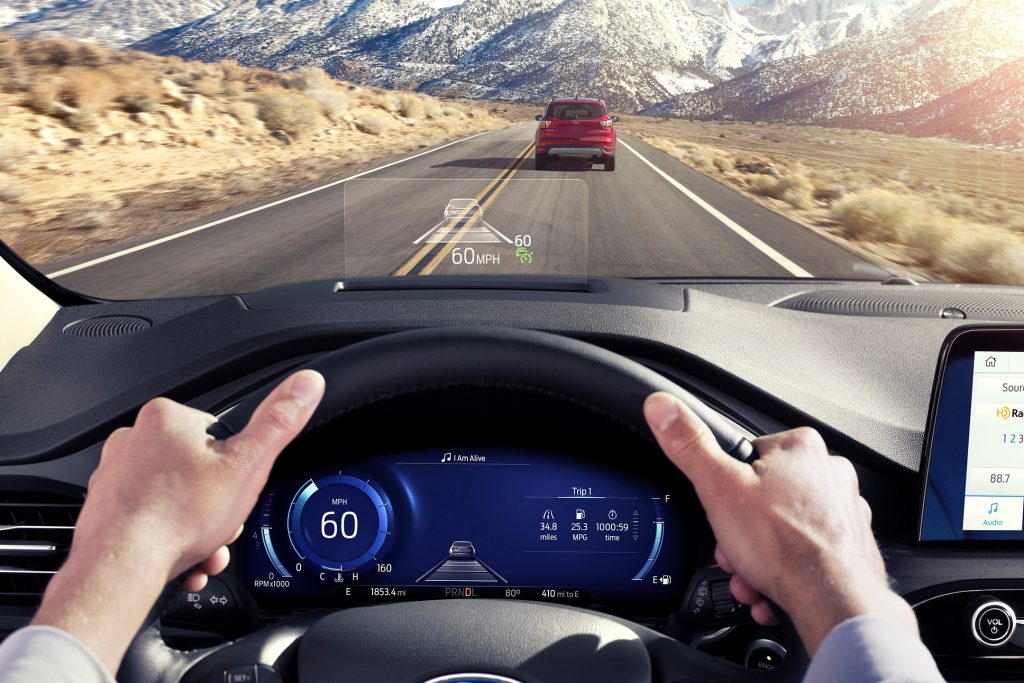 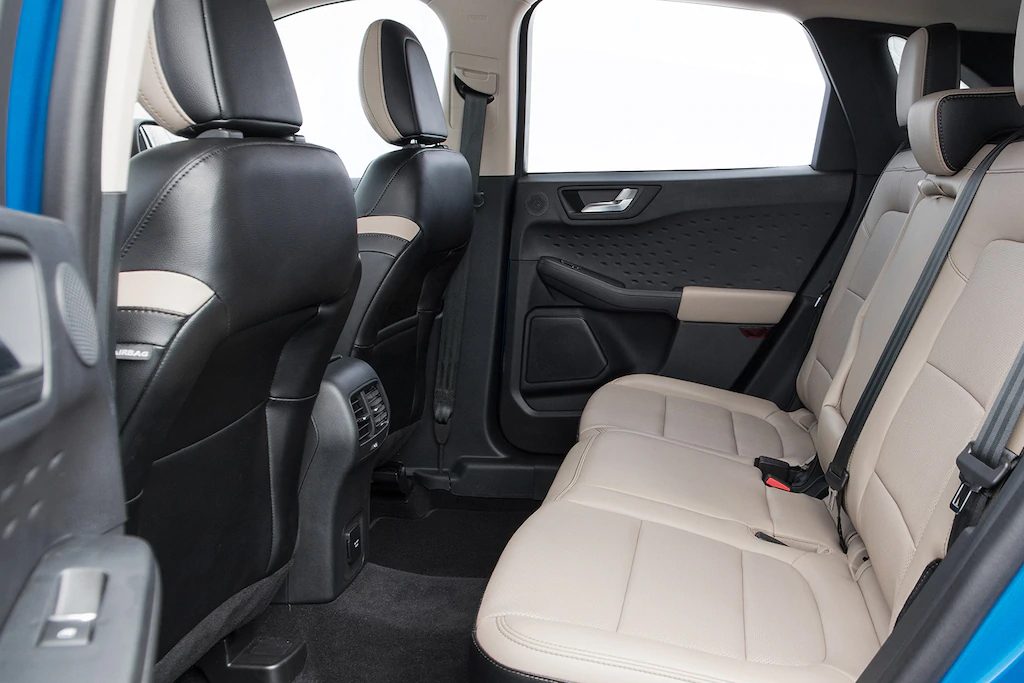 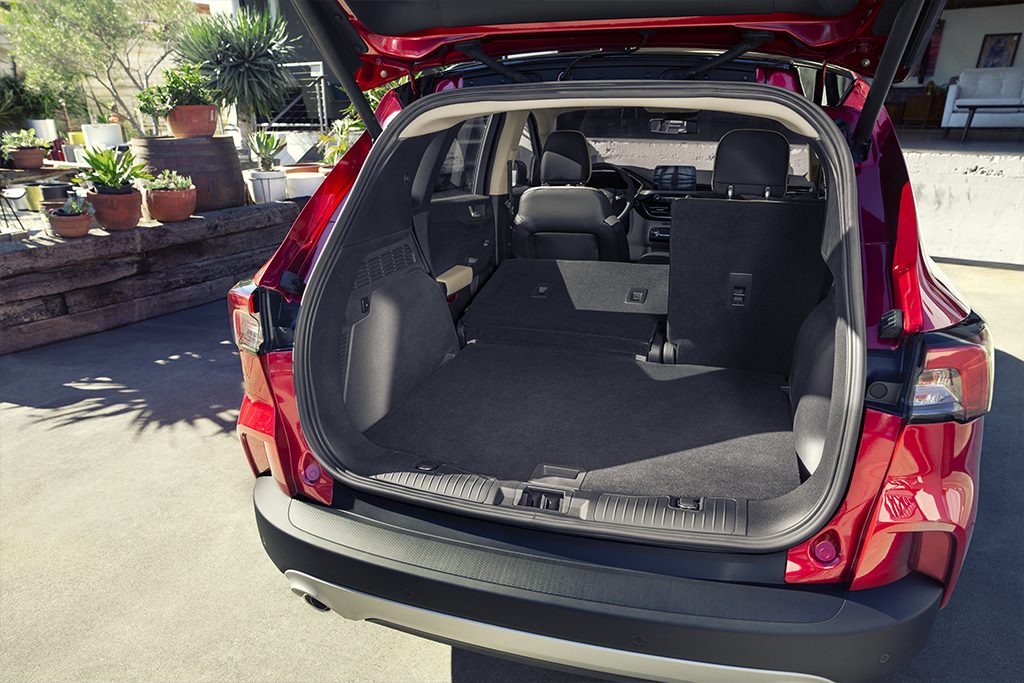 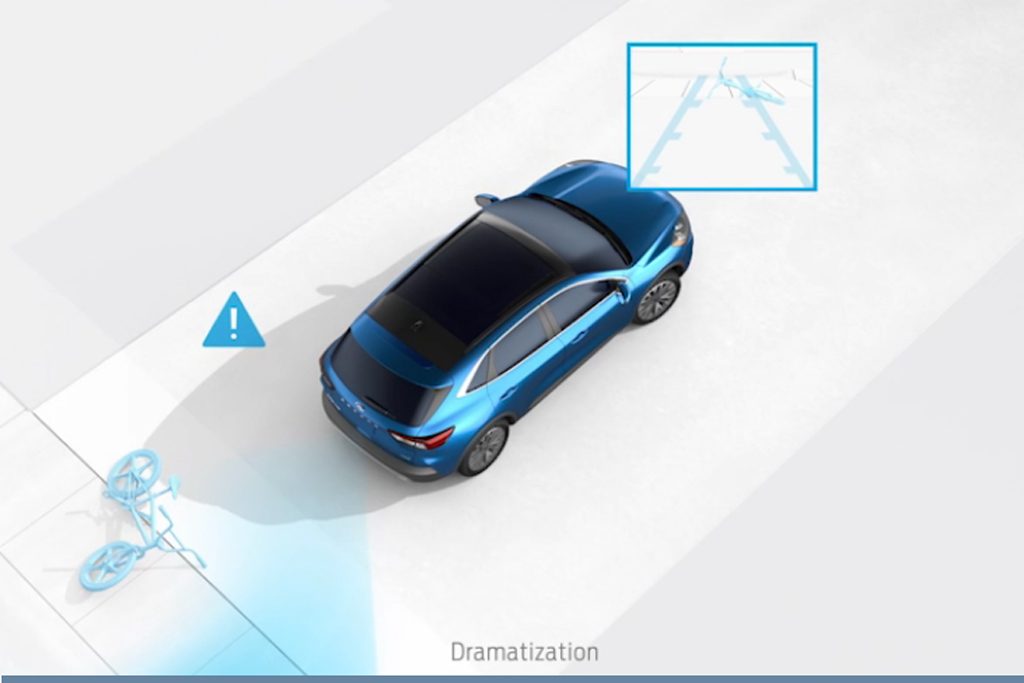 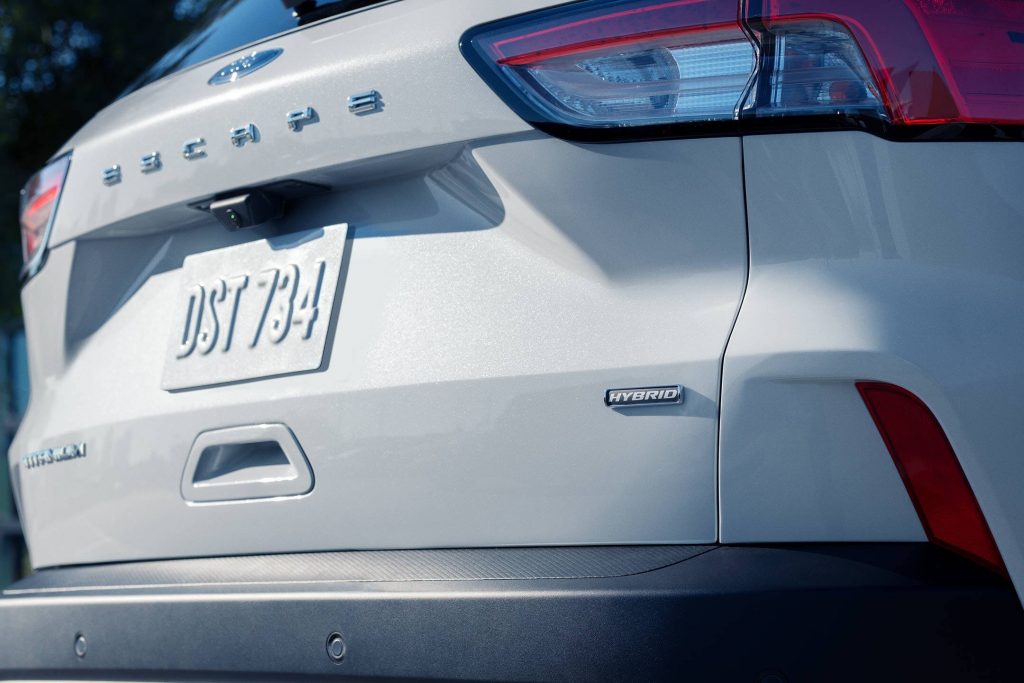 With today’s reveal of the stylish new Escape, featuring the small SUV’s best-ever performance, flexibility and smart new technology, Ford is reinventing the model that helped drive the popularity of the segment.

Escape, which debuted the world’s first hybrid SUV in 2005, brings back two hybrid choices for 2020, a standard hybrid and a plug-in variant, and introduces technologies ranging from drive modes and driver-assist features to electric vehicle ingenuity and on-board connectivity.

“This all-new Escape brings a sleeker, sportier design with the capability to take you on just about any of your life’s adventures,” said Kumar Galhotra, Ford’s president, North America. “With our class-leading hybrid powertrains, customers will spend less time at the gas station and more time on the road.”

To create a sportier look for the all-new Escape, designers turned to some of the most high-profile sports cars in the Ford showroom. The shield-shaped trapezoidal grille is inspired by the sixth-generation Mustang, while the lower front end borrows from Ford GT. Compared to the current model, the all-new Escape stands lower, wider and longer.

With a sloped roofline, optimized lift gate spoiler and strake, and efficient underbody, the all-new Escape is the most aerodynamic to date. Meanwhile, it sheds more than 200 pounds from the current model, due in part to the extensive use of high-strength, lightweight steel.

New powertrains and transmission systems, a reduction in weight, improved aerodynamics and updated suspension system all contribute to one undeniable fact: this is the best-performing, most fun-to-drive Escape ever.

Gas engine-powered models as well as the standard hybrid are available with all-wheel drive. EcoBoost-equipped models get a new quick-shifting 8-speed automatic transmission for smooth, responsive shifting, while every Escape receives an all-new suspension and improved isolation with a new isolated rear subframe.

“This new vehicle performs like no other Escape before,” said Jim Hughes, Escape chief program engineer. “It’s quick, it’s responsive and, in staying true to the standard set by three generations of Escapes before it, it’s a heck of a lot of fun to drive.”

The new 2.0-litre EcoBoost engine, available on Titanium, is projected to produce 250 horsepower and 275 lb.-ft. of torque using 93 octane fuel, while turning in a 0-60 mph time up to 10 percent faster than the outgoing Escape 2.0-litre. When properly configured, it is rated to tow 3,500 pounds.***

The all-new 1.5-litre EcoBoost, standard on S, SE and SEL, is projected to produce 180 horsepower and 177 lb.-ft. of torque using 93 octane fuel. When properly configured, it is rated to tow 2,000 pounds.*** To help conserve fuel, the 1.5-litre EcoBoost debuts cylinder deactivation, a Ford first for North America, which senses when one cylinder isn’t needed and shuts it down automatically. The system can activate or deactivate a cylinder in 14 milliseconds to maintain a smooth ride.

The plug-in hybrid variant, available on every trim level except S and SE Sport, projects a best-in-class EPA-estimated range of at least 30 miles in electric-only mode. Escape Plug-In Hybrid has a Level 1 / Level 2 AC charging port. Using a 110-volt Level 1 charge, the estimated time to fully charge the battery is 10 to 11 hours. Using a 240-volt Level 2 charge, charge time drops to roughly 3.5 hours.

Hybrid models feature four EV modes that allow customers to select the settings most suitable for their individual needs. This means:

With the second-row seats in the full forward position, the rear cargo area extends roughly six inches to offer 37.5 cubic feet of cargo space in gas engine-powered models (cargo and load capacity limited by weight and weight distribution). The cargo area was designed to accommodate four sets of golf clubs or a full-size dog crate.

The all-new Escape Hybrid packages its liquid-cooled lithium-ion battery smartly below the second-row seats rather than occupying a significant portion of the cargo area. The briefcase-shaped battery in the standard hybrid measures approximately one-third the size of the old Escape Hybrid battery.

Despite a slight drop in vehicle height and with the hybrid battery packaged below, the engineering team was able to increase headroom throughout. First- and second-row headroom, shoulder room and hip room all improve versus the current Escape.

With a selectable drive mode system standard across the lineup, Escape makes it easy for Escape owners to create the ride experience they desire – or the one that conditions demand. Modes are tailored for normal, eco, sport and slippery, plus snow and sand conditions.

Titanium models are available with an all-new heads-up display, a first-for-Ford in North America. The feature that projects information onto a 6-inch screen, giving drivers easy access to important information such as vehicle speed without taking their eyes off the road.

Class-exclusive driver-assist technologies include available Active Park Assist 2.0 and Evasive Steering Assist. Active Park Assist 2.0 allows the driver to park in a parallel or perpendicular spot with the touch of a button, without having to work the steering wheel, gear shifter, gas or brake pedal. Evasive Steering Assist detects a slower-moving or stationary vehicle ahead and provides steering support that can assist the driver to avoid an imminent collision.****

Escape comes standard with Ford Co-Pilot360™, and makes available other driver-assist features such as Adaptive Cruise Control with Stop-and-Go and Lane-Centring.

FordPass Connect™ is a standard feature that provides 4G LTE Wi-Fi for up to 10 mobile devices with compatible wireless subscription service. FordPass Connect also gives drivers remote access to their Escape, allowing them to use their smartphone to lock, unlock, locate and start the vehicle, as well as monitor key vehicle diagnostics.

An 8-inch touch screen – standard on SE models and above – shares information with the available 12.3-inch all-digital instrument cluster, which displays important vehicle information such as speedometer and fuel level. It uses 3D animated graphics to indicate the drive mode.

The all-new Escape, available in S, SE, SE Sport, SEL and Titanium series trim levels, is built at Louisville Assembly Plant in Kentucky. Vehicles are due to reach showrooms this fall. Plug-in hybrid units are due to arrive next spring.

For the 2005 model year, Ford became the first U.S. manufacturer to offer a hybrid when it introduced the Escape Hybrid, the world’s first-ever hybrid SUV. Between 2004 and 2012, 114,000 Escape Hybrids were sold.

For the 2013 model year, Ford introduced a third-generation Escape, with European styling shared with its global cousin, Kuga. The change proved popular, and Escape remained one of the top-selling vehicles in the Ford showroom – and in the fast-growing small SUV segment. To date, Ford has sold more than 4.5 million Escapes in North America; more than 98 percent of them are still on the road today.***** Escape is the company’s second best-selling vehicle in the United States, trailing only F-Series.